Lately, i wanted to make a new test / lab environment that would be dispensable, fast to deploy and easily customisable. VM’s are all nice for lab use and they served me well over the years, but they tend to be slow(er) to deploy, heavy on resources and lets face it, 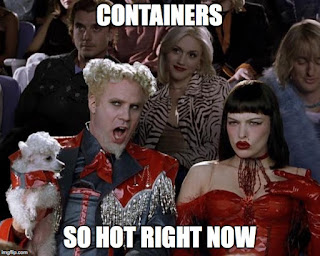 So i’ve decided to play around with Docker. I’ve played with Docker in the past but i haven’t done anything too serious, i just took the official postgres Dockerfile and run it to see how it works. This is how i started my whole Docker exploration, i took the official postgres docker file that can be found here and made an image. Immediately i saw that it wasn’t exactly what i wanted, i wanted something less generic. The things that i would like are :

So i started creating my own Dockerfile that would fill my needs and at the same time i would learn some more about Docker, 2 birds one stone kind of thing. After several hours and some testing i came up with something that was working (link at the bottom). It still needs some work to be done but i plan maintaining it for my own use so feel free to use it if you like what i’ve done there.
Let me explain a bit how it works.
With :
ENV PGBINDIR=/home/postgres/pgsql
ENV PGDATADIR=/home/postgres/pgdata

I can customise the installation and the pgdata directories, I install all packages i need, note that comments on joe will be deleted! Then i add postgres user to sudoers (this dockerfile is not meant to be secure, ease of use is what i am looking for when it comes to a lab postgres instance).
I -always- get the latest postgres version sources, compile and install (including extensions , documentation etc) set some environmental variables, configure postgres (postgresql.conf , pg_hba.conf) , put a sample recovery.done there so slaves can get it from pg_basebackup , install some extensions in template1, initdb with checksums,  create a replication user and finally copy a very simple replica creation script to the docker image.

How to make it work
With Docker installed its pretty simple :

Keep in mind that i have started playing around with Docker just 2 days ago. There might be a better way to assign static ips that I’m not aware of (yet).

Now, say that you have put some data in master and you wanna create a replica on slave1, something like this should work :

The Dockerfile can be found here and hopefully it can help some people on setting up a lab fast and easy.

Thanks for reading.
– Vasilis Ventirozos

Do you have a question?